Diane Hight didn’t know why her father had become an alcoholic. It wasn’t until much later in life she realized that he was suffering silently from his experiences in World War II. This discovery and her abiding respect for the generation that fought in WWII and Korea led her to found Forever Young Veterans. 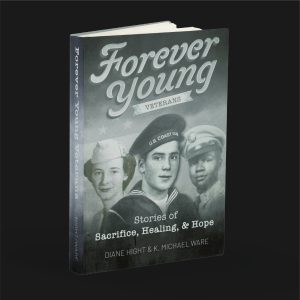 “They are a generation that has never asked for anything. I thought at the very least I could grant some special wishes for them.”  Since 2006 Forever Young has honored more than 2500 Veterans 65 years and older with “Trips of Honor” to nine countries and granted more than 300 special wishes. Diane emphasizes that traveling with older Veterans can have some logistical challenges – each trip includes a medical team.

Some of the wishes were small, like a pilot who wanted to sit in the cockpit of a modern aircraft. Some turned into something larger. One WWII soldier was reunited with his first love in a small French town seventy five years later.

While it may seem counterintuitive to return Veterans to the scene of some of their worst days, doing so with their fellow Veterans has a profound healing effect. Family members of some Veterans say they never talked about their war experiences but opened up after a Trip of Honor. The burden of their silent suffering had been lifted. One Veteran said “Who would have ever thought that the best days of my life would be at the very end of my life.”

Diane has compiled 22 of their stories in a new book titled “Forever Young Veterans; Stories of Sacrifice, Healing and Hope.” Proceeds from the book will help fund future trips.

Listeners who are interested in helping grant a wish or be an escort on one of the trips are encouraged to contact Forever Young Veterans.

TAKEAWAY: “It doesn’t take a lot to make a difference in the lives of these guys.”