Hometown Heroes Radio creator and host Paul Loeffler has done some amazing work assuring that the stories of World War II and Korean era Veterans are not lost to history. Since 2005 Paul has interviewed an average of one World War II Veteran per week. 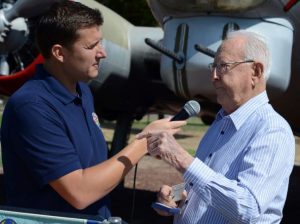 Much of Paul’s inspiration came from an early moment in his life when he accidentally came across a framed newspaper article hidden away in his grandfather’s closet. It described how Dr. Robert Loeffler pulled 26 men out of burning tanks and half tracks while under fire in a German ambush. Those actions earned his grandfather a Silver Star commendation and he would be awarded a Bronze Star at the Battle of the Bulge.

While a television broadcaster, Paul pitched the idea of adding short feature segments with World War II Veterans to their regular broadcasts. His boss discounted the idea saying “Nobody wants to hear a bunch of old guys talking.” Paul did it anyway and the series won awards. He founded Hometown Heroes Radio in 2007 and began syndication in 2013. The program is currently airing on 13 stations.  His job as a radio sports announcer allows him to travel all across the country and he seeks out Veterans to interview in all those communities.  Listeners can hear over 740 archived shows and even suggest potential guests via Paul’s website.

Paul shares some of the more interesting stories he has helped tell. While the stories are all different, he says one common theme is the humility that all these Veterans display. We share the fact that we both feel a sense of urgency to make sure these stories are told. It is estimated that only 174,000 of the 16 million persons who served in World War II are still alive today.

TAKEAWAY:  “No matter where you live in this country of ours, no matter how big or small your hometown may be – there are stories that should not go untold.”