Landing craft and the men who sailed them were often unheralded. But they were a critical part of our victory in World War II. They were especially important to the island hopping campaign in the Pacific theater. 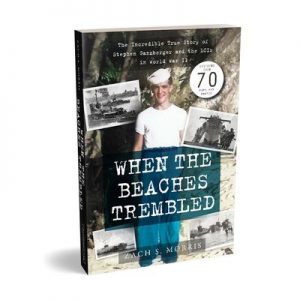 Like many of his generation, Steven Ganzberger enlisted as soon as he turned 18 following the attack on Pearl Harbor.  His grandson Zach Morris has always been an avid World War II historian. He was visiting town on May 18, 2011 and decided to conduct a 2 hour interview with his grandfather. Two days later, Steven passed away. This put Zach on a 10 year odyssey to learn more about the landing craft that his grandfather and his comrades sailed. The result is a wonderful book called “When the Beaches Trembled.”

Three types of landing craft were used during the second world war; Landing Craft Infantry (LCI), Landing Craft Tank (LCT) & Landing Craft Mechanized (LCM). Service aboard these craft was miserable. All were designed with flat bottoms that allowed them to get close to shore and beach themselves in order to deploy their troops or equipment. This meant that sea sickness was a regular curse for their crews. There was only one restroom for a crew of up to 60 men and fresh water was at a premium.

After a disastrous experience at the Battle of Tarawa, the Navy converted some landing craft to gunboats in order to provide better fire support for the troops landing on the beaches.  In addition to providing fire support against opponents on land, they also served as anti-aircraft platforms. One of Steven’s best friends was killed by a Kamikaze pilot at the Battle of Leyte Gulf.

Steven participated in seven campaigns in the Pacific. He and his fellow crew members were in constant combat for two years.

TAKEAWAY:  Most “old Navy” officers weren’t keen on the idea of beaching their ships. LCI command was NOT a preferred assignment.