“Frogmen” was the nickname given to the members of the newly formed Underwater Demolition Teams (UDT) during World War II. Their fellow service members called them “Half Fish, Half Nuts”. They were the predecessors of today’s Navy SEAL teams. 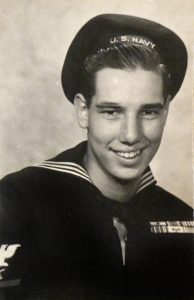 The history of the formation of these special units is the subject of a new book by award winning journalist & author Andrew Dubbins. It is called “Into Enemy Waters; a World War II Story of the Demolition Divers Who Became the Navy SEALs”. Much of the book is based upon the personal experiences of one of the last living original Frogmen George Morgan.

Draper Kaufman is credited as the being the “father of the Navy SEALs”. Although the son of a Navy Admiral, Kaufman was denied a commission from the Naval Academy due to poor eyesight. He volunteered with the American Ambulance Corps in France prior to the US entering the war. He then volunteered with the Royal British Navy where he gained valuable experience defusing bombs during the London blitz. When Admiral Nimitz asked Draper why he wasn’t in the US Navy, He replied that our Navy didn’t want him because of his eyesight.  Nimitz resolved THAT issue immediately.

The Frogmen of UDT would see action in some of the most famous battles of World War II including D-Day, Iwo Jima, Okinawa and even the waters of Tokyo Bay gathering intelligence for an invasion that never took place. Very often they would swim long distances to the enemy beaches armed with only a knife, their demolition tools and their bravery.

Dubbins shares the creativity Kaufman and the original Frogmen used in developing techniques and tools, versions of which are still in use today.  Kaufman insisted on recruiting strong swimmers as he felt it was easier to train a man to use explosives than to swim. Upon reflection, George Morgan jokes that it was probably a mistake he told the recruiter he was a lifeguard.  George also shares firsthand accounts of the terror of war and bravery of his fellow UDT Frogmen.

TAKEAWAY: It took a particular type of bravery for George Morgan to help Andrew on this project. It caused him to recall bad memories that he had been trying to forget for decades.