The Distinguished Flying Cross is our nation’s fourth highest award for heroism and the highest award for extraordinary aerial achievement. Three time DFC recipient Ross Detwiler and his fellow “Misty” pilots volunteered to fly some of the most dangerous missions of the Vietnam War. Twenty two percent of the forward air controllers were shot down. Ross was among them. 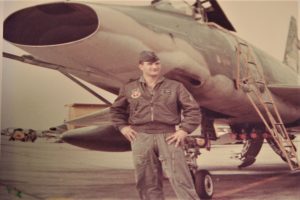 The original Forward Air Control missions were flown in much slower, propeller driven aircraft. However, because the loss rates of pilots and aircraft were so high, the mission was renamed Fast Forward Air control and transitioned to F-100 and F-4 aircraft. Ross flew both. He says that their mission was basically to go out and get shot at so they could discover where the enemy was. The lives of the pilots who flew “Misty” missions are detailed in his book “The Great Muckrack and Rosie”.

In his book Ross recounts the sometimes tragic and often heroic stories of some of the men he flew with. There are also more light hearted anecdotes of the adventures of the pilots who lived day to day and developed a rather morbid sense of humor. Ross shares his recollections of the day his aircraft was hit by multiple rounds and caught fire. Everything seemed to happen in slow motion but the equipment worked precisely the way it was supposed to. He is everlastingly grateful to the crew of the “Jolly Green” helicopter rescuers who pulled him out the jungle and lists each by name in his book.

The Distinguished Flying Cross Society is a membership organization consisting of DFC recipients and their family members. Their mission is to honor the legacy of the men & women who have received the award, preserve their rich legacy & historical narratives and educate the public on the values of courage, patriotism and character.