Coffee or Die Executive Editor Marty Skovlund, Jr. had two aspirations in High School; play for the NBA and become an Army Ranger. The Los Angeles Lakers never called but he did earn a Ranger tab. The idea that someday he would be doing “classic Ernie Pyle” journalism never crossed his mind. 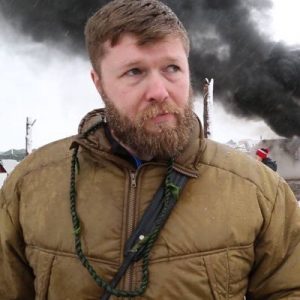 Marty founded The Havok Journal to give a voice to the Veteran community.  Later, he approached Evan Hafer (a fellow soldier and Founder/CEO of Black Rifle Coffee Company) about starting a media arm of Black Rifle. Coffee of Die launched in June of 2018. Their website receives 2 million visits per month and their YouTube channel has generated 13 million views so far this year.

Marty says he left Afghanistan with a rifle and returned with a camera. His reporting for Coffee or Die has also taken him to Iraq and he recently returned from Ukraine. He shares what he witnessed in that conflict. “In Ukraine they are fighting for their very existence. Even common citizens have taken up arms.” One of his most compelling series actually was domestic coverage – the Standing Rock protest in North Dakota.

Marty’s current project is a book about special forces legend Chief Petty Officer Shannon Kent, a woman operating “outside the wire” with Special Operations at a time when it was almost unheard of.  She was killed by an ISIS suicide bomber in 2019.

I strongly encourage listeners to read his first book: “Violence of Action; The Untold Stories of the 75th Ranger Regiment in the War on Terror.”  Also, look into The Darby Project.

We also discuss Marty’s evolution into being a “real journalist”, an issue he struggled with for a long time.  He drew from his experience as the “new guy” in Ranger training. “You can’t expect others to take you seriously if you won’t take yourself seriously.”

TAKEAWAY: They idea that long form journalism has died is not accurate. People just have more competition for their time and if the product is compelling they WILL read it.