“Richard Eager: A Pilot’s Story From Tennessee Eagle Scout to General Montgomery’s Flying Fortress” is the product of a 13 year  long collaboration between a World War II B-17 pilot and his family.  Because Richard Evans was such a gung-ho air cadet and an Eagle Scout at heart, one of his fellow cadets began calling him Richard “Eager” and the nickname stuck. 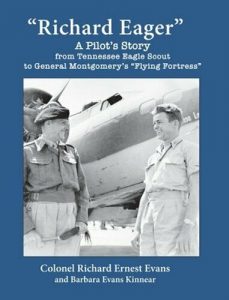 Unlike many World War II Veterans, Richard often regaled his family with stories of his time in the service. At their urging he sat down, and over the course of three years penned a 21 chapter manuscript. However, he was never able to get it published. Upon Richard’s death in 2006 his daughter Barbara Evans Kinnear made it her personal mission to get her father’s story into print. 100% of the proceeds from book sales benefit the Air Force Aid Society.

One of the more interesting aspects of Richard’s service included being selected to fly a B-17 that was “won” by British General Bernard Montgomery in a “bet” with General Eisenhower.  Captain Richard “Eager” was ordered to pick his crew, load into an assigned B-17 and report to General Montgomery. The book relates some little known insights into General Montgomery and the Eagle Scout from Tennessee even got to meet the King of England.

Richard left the service after World War II but was called back to serve during the Korean War and the Cold War. His career put him into the cockpits of many bombers more advanced than the B-17 including the B-47, B-52 and B-58. Richard’s last project was the XB-70, only two of which were ever produced.

TAKEAWAY: Richard’s story might have been lost forever when Barbara and her family lost their home to a wildfire in 2008. Miraculously, she discovered some of the original draft chapters along with a treasure trove of her father’s letters and photographs while cleaning out his storage shed.