DCM Consulting Founder Christopher “Dutch” Moyer served 31 years in the Army – 26 of those in Special Operations. He has taken part in over 1,000 successful combat assaults in classified & unclassified missions in Afghanistan and Iraq. 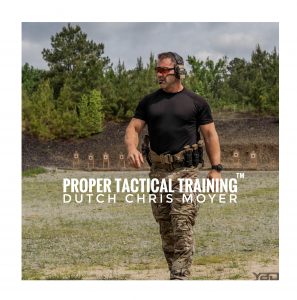 Even as a child he wanted to be a soldier and at the first opportunity enlisted in the tank corps. However, he found that the Army in the 1980’s was not what he had hoped.  After a five year break, he returned. This time he “Wanted to be in the worst possible places with the best possible people.” He became an Army Ranger and spent the last 14 years of his career with the elite Joint Special Operations Command. JSOC was created after the disastrous “Desert One” mission.

After retiring Dutch tried his hand at various careers but in 2014 decided to return to his strengths. “I’m much better off training men to survive battle.”

DCM Consulting provides advanced training to both military and law enforcement units across the country. Part of his “why” for starting his company stemmed from the fact that many local law enforcement agencies don’t provide the specialized training necessary for their officers to survive high intensity situations. (Dutch shared a recent situation where his fee was paid by a private citizen because their local police department did not have the funding.) In addition to close quarter battle, his training includes rifle/pistol proficiency and stress inoculation.

His trademarked phrase “My Sword is Your Shield” is a concept that not only applies to military/law enforcement situations but also applies to what can be achieve by working as a team in almost any context.

Dutch also pays homage his Combat Assault Dog Valco who sacrificed his life saving Dutch and his comrades on a mission.

TAKEAWAY: “I can’t be the agent of correction any longer but maybe I can help someone who is.”