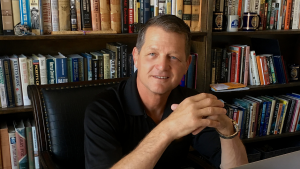 “Bridging The Gap”, a new book authored by 26 year law enforcement veteran Glen Williams might be directed at his police comrades but holds learning lessons for all of us. Over the course of his career, Glen suffered through two divorces, numerous traumatic events and developed severe PTSD.

“My objective in writing this book was to help others not do the same stupid things that I did. If I can help one person avoid a divorce or PTSD or suicide then I win.”

He recounts a briefing held for police academy graduates and their spouses. The couples were told the divorce rate among law enforcement couples was high. There would be things they saw on the job that officers would not want to or couldn’t talk about with their spouse. “They told us open communication was important but they didn’t tell us HOW to do it.”

His law enforcement career got off to a rough start when he was rejected by the postal inspector’s service because of his diabetes. His evolution to a “regular beat cop” was fraught with other challenges including supervisors who misconstrued his lack of communication as arrogance. Glen says he later realized he would give off that vibe as a way of covering his own insecurities. “Subconsciously I was protecting myself. Basically..Realistically I was destroying the thing I cared most about – my marriage.”

In Bridging the Gap he recounts several scenarios from the ridiculous to the extremely traumatic. One of my favorites was the stormy night when he almost shot Ronald McDonald.

He strongly recommends journaling as a healthy method of dealing with trauma. Blue Help and the CODE 9 Project also provide support resources for those in the law enforcement community.

TAKEAWAY: Glen provides an eight hour course in communication to police departments around the country. He also encourages anyone who needs to talk to contact him directly.