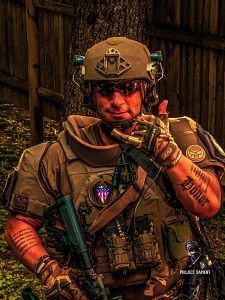 Project Sapient Co-Founder Ayman Kafel became a witness to war from his first days on earth.  His father was working in Liberia when Ayman was born, but the Liberian civil war forced his family back to their native Lebanon.  The Lebanese civil war made them seek a more peaceful life in America.

Like many immigrants, Ayman has a deep and abiding love for the US and what this country stands for.  So when we were attacked on 9/11 he immediately enlisted. “Our family felt that those evils we had escaped had followed us here.”  He experienced several combat deployments and planned to pursue a career in Special Forces. A forced medical discharge would cut those plans short.  He pursued a “second mission” protecting his fellow citizens as a law enforcement officer.

Ayman has served 15 years with the Attleboro Police Department and currently commands their “Problem-Oriented Policing Unit.” We spend some time exploring this rather unique community policing concept.

Ayman created The Project Sapient podcast to engage his law enforcement/military brothers and sisters in conversations that need to take place.  In a recent Havok Journal article, he expands upon the “sheepdog” concept by proposing that within that group there is a sub-set he calls “Hybrid-Wolves”.  These are the “truest practitioners” of the warrior mindset; they have tuned their instincts to proactively seeking out evil. We both agree that law enforcement officers need to be allowed to act upon their gut instincts.

Ayman emphasizes the importance of continual training for our police officers. Many officers are forced to pay for additional training out of their own pockets.

TAKEAWAY: “My experience as an immigrant in the military was enlightening. No matter where we came from, our language or religion, we saw each other as brothers and sisters. One people – we were American Soldiers.”