The Postal Inspection Service is the nation’s oldest federal law enforcement agency.  They protect the U.S. Postal Service and its employees, infrastructure and customers and enforce the laws that defend our nation’s mail system from illegal or dangerous use. 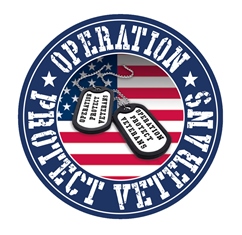 Postal Inspector Ed. Trejo is a former member of the Air Force Office of Special Investigations. He said the move to the Postal Inspection Service was a natural for him; similar missions, the same teamwork & comradery and ability to continue serve the country and protect its citizens.

Ed discusses Operation Protect Veterans, a crime prevention campaign created by the Postal Inspection Service and AARP.  A study by AARP showed that Veterans are twice as likely to be the victims of scams as the general public.  Reasons include the special bond of trust built among Veterans (something scammers seek to exploit), scammers more familiar with VA benefits than many military members and the effects of PTSD which makes it more difficult to spot and defend against emotional manipulation.

Some of these scams have been replicated for ages. The “Spanish Prisoner” scam was prevalent in the late 1800’s and used the same concept as the current “Nigerian Prince” scam promulgated via email.

Ed discusses some of the most common scams and what people can do to protect themselves.  These can be found here:  www.operationprotectveterans.com

A major challenge faced by Postal Inspectors is the fact that victims are often embarrassed to admit they have been victimized. Ed emphasizes that coming forward is essential to protect other potential victims.  He shares a specific story where his office interceded on behalf of an older Veteran who was being victimized by a “romance scam”.

Anyone who believes they have been victimized or would like to report a crime may call (877) 876-2455 or report online at www.uspis.gov/report.