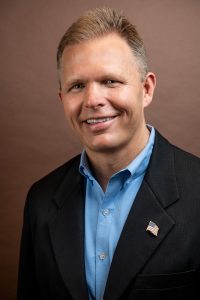 He chose aviation upon graduation and became a helicopter pilot. Dean is unique in that he is an aviator authorized to wear the Ranger tab. He says the incredible stress and sleepless nights of the 72 day Ranger course was the perfect preparation for someone looking to start a company.

Dean worked with Proctor & Gamble and Mars, Inc. before partnering to purchase Omega Apparel, a company manufacturing uniforms for the US military. This was his first foray into the apparel industry and inspiration to make the intentional choice to start a company with products “made in the USA with no exceptions.” Five minutes into an investor pitch, NASCAR legend Darrel Waltrip said “I’m in” because he felt the vision of Authentically American reflected his personal values.

One of their core missions is creating American jobs and they also believe in giving back. Authentically American donates 10% of their profits to the Folded Flag Foundation and Reboot Recovery. They also produce products at cost for non-profits working in a variety of sectors.

Dean intentionally chose to start off in the Business to Business market because corporations, charities and organizations spend $8 billion annually on apparel alone. His company then expanded into their own consumer brand and the collegiate market.

Dean’s advice to other entrepreneurs:

The issues exposed by the global pandemic reinforced Dean’s belief in the mission of Authentically American. While he sees a trend toward re-shoring, he cautions that many industries don’t have the infrastructure and workforce to make it happen right away. It will be a generational effort.