Don Bentley read his first Tom Clancy novel when he was 13 years old. This Army Veteran is now writing for the “Tom Clancy universe” with his first novel achieving best seller status.

Both Don’s grandfather and father served in the military. He was awarded an Army ROTC scholarship to Ohio State University and went on to fly Apache gunships. Don flew as part of the Quick Reaction Force on Operation Red Wings. Following his Army career, Don briefly tried the corporate world but found he wasn’t quite ready for the cubicle life. He joined the FBI, serving on the Dallas office SWAT team. He then accepted an offer from some Army friends who founded a company that developed technologies for the special operations community. 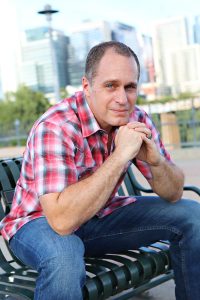 Don started his first novel in high school and his teacher told him he shouldn’t give up on that dream. Enrolling in the Seton Hill writing popular fiction master’s program proved to be a defining moment in his career. A contact he made at the Thrillerfest Conference told him “not this book but go home and write a better book.” Don took her suggestion and it became his first book sale.

Don Bentley was finding success with his Matt Drake series when he was approached to join the Tom Clancy team to write “Target Acquired”, the latest novel in their Jack Ryan Jr. series. He says the closest equivalent would be a science fiction writer being asked to write the next Star Wars book.

We also discuss Don’s perspective on the withdrawal from Afghanistan and his opinion piece published in the National Review “Afghanistan – Was It Worth It?” While he believes our initial entry into Afghanistan was justified, he also emphasizes that democracy is not something that can be imposed and exported. “By God, if we would have just summoned the national will to do that, executing a noncombatant evacuation operation in Afghanistan is far from an unsurmountable task.”

TAKEAWAY: “If you discount the 17 years and three books that didn’t sell, I am an overnight success!”