The sacrifice and gratitude experienced by those who serve is the topic of our conversation with Lt. Col. Charles Faint, Assistant Professor and Deputy Director of the Modern War Institute at West Point. Faint has published several insightful articles in the Havok Journal. 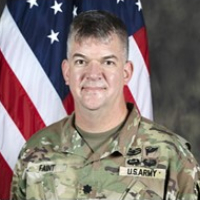 The theme of today’s conversation was inspired by a self-obituary written by West Point graduate John Alexander Hottell III when he was 26 years old. Capt. Hottell would lose his life in Vietnam at the age of 27. A plaque featuring his obituary is posted in one of the barracks at West Point.  He wrote about what he LIVED for rather than what he died for and the opportunities that service in the Army provided him. Faint requires his student to write a self-obituary or a consolation letter to the family of a fallen soldier. This teaches to cadets to recognize the value of what they have and how inherently dangerous their profession is.

Faint has served 27 years in the Army and was deployed seven times to Iraq and Afghanistan attached to special operations units. We discuss the perception challenges he faced when entering a Master’s program at Yale as a 40 year old Veteran. Along with fellow Veteran students, he started an “Army 101” to help his civilian counterparts better understand military members. His time a Yale also inspired him to write his own version of the original poem penned by historian Margaret Atwood.

The way Afghanistan ended was a significant factor in his decision to retire from the Army next year. We spend some time discussing how this ending may be impacting other Veterans of that war. “It’s another rock in the rucksack that they now have to carry around.”

TAKEAWAY: I am constantly amazed at the sacrifice made on our behalf by military families like the Faints and encourage every to express gratitude every day.  Both of Lt. Col Faint’s grandfathers served in the Second World War, both his father and wife served in the Army and his daughter is applying to West Point.