COMCAST/NBC Universal Senior Vice President of Military and Veteran Affairs Carol Eggert says that when she was recruited by the company she “..wasn’t looking for a job but found a purpose.”  She had already compiled an impressive military career rising from the enlisted ranks to Brigadier Genera 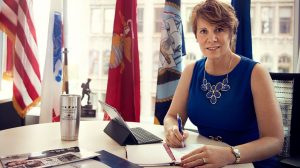 When Carol first joined the Army, the service was still gender segregated; not all positions were open to women. The irony was not lost upon her while leading Provincial Reconstruction Teams in Iraq working to better integrate women into their government. She witnessed many changes over more than three decades of service but perception challenges remain.  While out in the community, people still make the assumption that it was Carol’s husband who served. She emphasizes that female Veterans need to tell their stories and establish their rightful place as warriors. (Carol herself is a Purple Heart recipient.)

COMCAST was founded by Navy Veteran Ralph Roberts and has been recognized as one of our nation’s most Veteran friendly employers. In 2017 the company was presented with the Employer Support of the Guard and Reserve “Freedom Award” – the highest honor presented by the Department of Defense to employers for their support of National Guard and Reservists.

Since 2011 COMCAST has supported hundreds of military serving organizations with more than $184 million in cash & in-kind contributions. We discuss several of their initiatives including Veteran employment programs and their initiative to help build digital equity. Their contributions often become a “force multiplier” for other organizations.  Carol also shares some other innovative projects like the Concussion Legacy Foundation and the I Was There film program founded by General George Patton’s grandson Ben.

TAKEAWAY: While attending the wedding of a female soldier wounded alongside her in Iraq, Carol was approached by the soldiers mother. She said “I am so glad there was a mother on the battlefield with her.”