Veterans Portrait Project founder Stacy Pearsall knew she would join the military – members of her family had served since the Revolutionary War.  She wanted to do something creative and became an Air Force combat photographer. She was a good one, practicing her craft in over 41 countries and twice winning the National Press Photographers Association “Military Photographer of the Year” award. 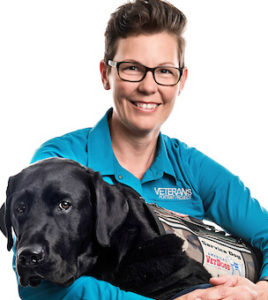 War is gruesome. An added challenge for combat photographers is that they often have to relive those moments while reviewing the photographs Stacy spent her three combat deployments on the ground and in the trenches, attached principally to Army & Marine units.  Initially she carried both a rifle and pistol but after several operations decided that because her primary mission was document the action, she opted to only carry a sidearm. “When things got bad enough, there were plenty of rifles around for me to use.”

Stacy was injured in IED attacks both in 2004 & 2007 and again during an ambush.  Serving in a predominantly male field, she worked extra hard to prove that she was up to the task and tried to hide the extent of her injuries.  However, a traumatic brain injury and nerved damage forced her into medical retirement. At 27 years old, the career she had dreamed of was over.

Her road to recovery brought new challenges. Not just the physical pain & depression but working to overcome prejudices against the fact she could be a female combat veteran.  However, while sitting in a hospital waiting room, she encountered WWII vet Mickey Dorsey who inspired her to a new mission in life; the Veterans Portrait Project.  Through photography she would let others know that the Veteran community is made up of a very diverse group of people. Over the past 11 years she has photographed over 7,500 Veterans and she will continue to do so until she has at least photographed Veterans in all 50 states.

Stacy encourages all listeners to go beyond just thanking a Veteran for their service – actively engage in the numerous programs that are available in your community. And to those Veterans who are struggling; “You are not alone.”

TAKEAWAY: “I believe Veteran’s experiences are universal, regardless of generation. My goal is to capture the essence of that individual and the emotion and the story.”