Mended Wings: The Vietnam War Experience through the Eyes of Ten American Purple Heart Pilots is a compelling collection of stories of heroism. Author Colin P. Cahoon served as an Army helicopter pilot himself and the book is his homage to the generation that came before. 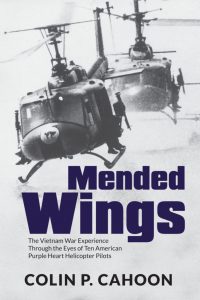 Colin didn’t set out to be a helicopter pilot, but started in Air Assault School. After being dropped off in the woods and having to trudge back to base, he realized that the helicopter pilots were already back at base and probably enjoying the officer’s club.  He decided to go to flight school instead.

Both his trainers and the aircraft that they flew were Vietnam era Veterans. Many of the aircraft still had patches covering the bullet holes they received from incoming fire. The bond between these pilots and the helicopters they flew was obvious to Colin and he always looked up to them.

Vietnam was the first “Helicopter War” and the Huey became the iconic image representing that war. About 40,000 Americans served as helicopter pilots in Vietnam. Most of them were shot down or crash landed at least ONCE during their tour. About half of the helicopters flown never made it back to base.

The book is organized in chronological order by the date each soldier was injured allowing readers to see the entire arc of the war through the eyes of those ten pilots. Each of the ten stories demonstrates the courage and bravery of these pilots and their commitment to never leaving a man behind. Many of the pilots treated their own wounds so as not to be removed from flight status.

Colin and I also talk about the issues faced by these Vietnam Veterans where they returned stateside and their lives after the war.

TAKEAWAY: “At the end of the day these are stories of triumph.”