GORUCK co-founder and CEO Jason McCarthy says his path from leaving the Special Forces to building a $100 million company is a “cautionary tale”.  He even wrote a book titled “How Not to Start a Backpack Company.” 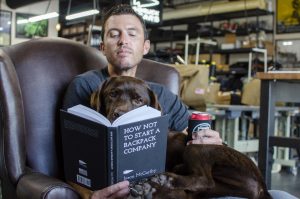 Jason served with the Green Berets and his wife Emily was a CIA Case Officer deployed to West Africa. Jason put together a “go-ruck” for Emily to carry in her vehicle and home.  This planted the seeds for GORUCK, but it was a long journey fraught with many ups and downs.

“You go from having a super high speed job to doing nothing that is cool anymore. Reconciling that can be a difficult thing to do.” Jason’s marriage was falling apart and he found himself sleeping on a friend’s couch.  His Green Beret training taught him that doing something is better than doing nothing. So Jason loaded some of his backpacks and drove the contiguous 48 states with his dog Java, pitching his product to potential retailers. No one bought any.

A transformational moment for GORUCK came when Jason and a team joined a rucking competition to “field test” their gear & take some photos.  He saw how many people were enjoying the activity. GORUCK would expand from a gear company to a people first company. They have now hosted over 7,000 rucking events with 150,000 participants all across the country. They range from simple team events to the brutal GORUCK Selection Course featured in the documentary “The Standard”.

P.S – The story has a happy ending. Jason and Emily are back together and their “back of a napkin” idea is hugely successful.

TAKEAWAY: “Failure is central to the human experience. I failed so many times in the Q-Course and in the early days of GORUCK. It’s all about what you do when you fail.”