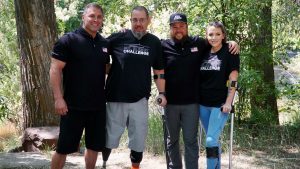 Mount Elbert is the second highest peak in the contiguous United States, rising to 14,440 feet above sea level. On September 15, Shannon vonDriska will be part of a Challenge America team of four severely injured Veterans climbing the mountain. Their mission is to inspire Veterans and others struggling to overcome their physical and psychological scars.

Shannon had hoped to become an Army medic. However, on a nighttime march she fell and immediately knew something serious was wrong. She continued because she wanted to graduate with her team, finishing the last 10 miles on a broken leg.   Multiple surgeries would lead to Chronic Regional Pain Syndrome, a debilitating neurological disease.  Very little is known about CRPS so proper diagnosis and effective standardized treatment is difficult to find.  “One day I got sick and I never got better.”

Shannon is very thankful for the Challenge America programs that have not only helped with her physical pain but also the psychological scars of Military Sexual Trauma. Shannon is one of the estimated 1 in 3 women and 1 in 50 men who have experienced MST. Challenge American’s Military Sisterhood Initiative has helped Shannon deal with those scars and also move toward healing by helping others. She says getting over the anger and resentment has been an added challenge to the physical pain.

Other members of the Mount Elbert challenge include Assaf Dory (amputee and CRPS sufferer), Dash Wong (Navy SEAL with only one lung) and Steve Fotion (Army Reservist). Both Shannon and Assaf will be making the 10 mile climb on crutches. The team is raising funds for Challenge America programs and pledges may be made here.

TAKEAWAY: “If you love someone with PTSD just try to be patient. I know it’s hard but it is also very hard for the person suffering. Please be patient.”