In The Moscow Rules, Tony and Jonna Mendez share some of the secret CIA tactics and techniques that helped America win the cold war against the Soviet Union. 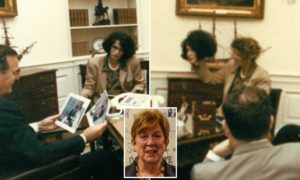 Jonna reveals her “true” self in the Oval office

Both Tony and Jonna have been dubbed CIA “Masters of Disguise”. Tony for his masterful execution of a highly risky rescue mission to extract US personnel from Tehran in the middle of the Iranian revolution. (This mission would become the basis for the academy award winning film “Argo”.)  Jonna’s successes were a little less public but nonetheless extraordinary.  Her boss challenged her to “audition” her new full face mask disguise by wearing it to a meeting at the White House. Sitting in the Oval Office a few feet from President George H.W. Bush and his top advisors, Jonna did a reveal in true “Mission Impossible” fashion.

Jonna shares some of the other tools they developed to allow them to avoid Soviet surveillance such as the “Disguise on the Run” technique where a person could change their appearance from a briefcase carrying diplomat to a little old Russian lady with a shopping cart within 45 steps and less than a minute. Another amazing development allowed a passenger to exit a vehicle and instantly be replaced with a “Jack in the Box” dummy that could be concealed in a briefcase or even a birthday cake – all in a matter of seconds.

The Moscow Rules exposes the extent to which magicians and Hollywood technicians contributed to our spying technology. Jonna shares that in her 25 years at the CIA, not one of these professionals ever asked for compensation. They contributed their expertise out of patriotism.

Jonna shares that most spy movies are historically incorrect but wildly entertaining. But in some cases, art does imitate life; the instantly lethal “L” pill does exist and was only issued twice in Jonna’s career.

We also discuss the “dark days” of traitors like Edward Lee Howard and Aldrich Ames.

TAKEAWAY: “The spy game has changed – it has become much more of a contact sport.”