“Sacrifice: A Gold Star Widow’s Fight for the Truth” by Michelle Black is a powerful read.  News that her Green Beret husband had been killed in action was just the beginning of a nightmare for Michelle and her family. Sacrifice is not a “grief” but rather emphasizes why it is important for our military families to be told the complete truth. 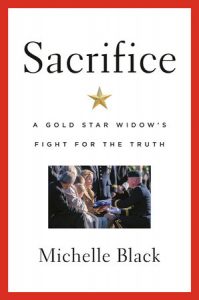 Michelle and the families of the other soldiers killed on that day received briefings from Army officials that began with few details and evolved into a series of “squishy” narratives.  Michelle herself had very little exposure to the military but with the help of her retired Marine father-in-law she began to identify several inconsistencies in the story they were being told. The ultimate insult came when Bryan and his team were accused of “going rogue” and Bryan’s team “was not indicative of what special operators do.”

As part of her quest for the truth, Michelle interviewed all the survivors of the action and Sacrifice includes a VERY detailed account of transpired that day.  Readers will rapidly become aware the death of Bryan and his colleagues had been avoidable and the mistakes made went beyond the typical fog of war.

Michelle also shares how her perspective about Memorial Day has shifted since Bryan was killed.

TAKEAWAY: Michelle emphasizes that her experience was a campaign against injustice and has not turned her against the military. She would still support her sons if they chose to join.