The Devil’s Hand is the fourth book by bestselling author and former Navy SEAL Jack Carr. It follows on his three other wildly successful novels “The Terminal List”, “True Believer” and “Savage Son”. 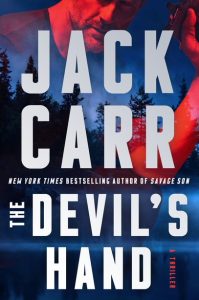 Jack served 20 years at the tip of the spear, beginning as an enlisted Navy SEAL sniper and rising to the rank of Lt. Commander.  When it became apparent that further promotion would mean he would no longer be in the field “kicking in doors”, he decided to close that chapter of his life and move on the other aspiration he had since he was a child; becoming a writer.

His mother was a librarian so Jack grew up with a love of reading. Looking back he realizes he was giving himself an education in good storytelling. He began writing The Terminal List during his months transitioning out of the Navy and it became a New York Times bestseller. The book is currently being made into an Amazon television series starring Chris Pratt.

One reviewer said Jack “..lived the life he writes about” and his first novel proved to be very therapeutic. While not his original intention, he realized he was releasing some frustrations resulting from his personal experience with senior level leaders whose decisions had dire consequences for men and women on the battlefield.

Jack had just begun outlining The Devil’s Hand when the pandemic hit. His experiences with adversaries watching us on the battlefield and adjusting their battle plans accordingly caused Jack to weave elements of what he was observing during the pandemic into his new novel.

One hundred percent of the proceeds from sales of his Jack Carr Collection merchandise go to Veteran related charities including the amazing Rescue 22 Foundation.

TAKEAWAY: “The great thing about writing is you are solving problems on the written page, kind of the same way I did on the battlefield. But if I mess it up in a thriller I can go back and edit it the next day so the consequences aren’t nearly as dire.”