Dr. Reagan Anderson served five years in the US Navy, most of it as a surgeon for the Marine Corps First Reconnaissance Battalion.  (A long time tradition of the Marine Corps is that they do not have their own medical or clergy so they pull those resources from the Navy.) He is one of several “Warrior-Healers” we have had on the show. 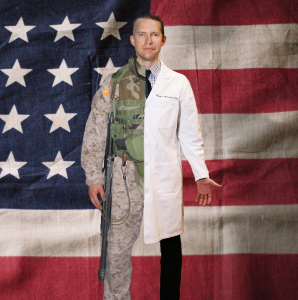 He describes conducting surgery in a war setting as “controlled chaos”.  Fallujah Surgical presented particular challenges; it was filthy and they were often operating under fire. He says patients sometimes looked like powdered donuts because of all the silt. Despite those challenges, Dr. Anderson never lost a patient who came to him alive.

Despite having attended seminary prior to medical school, he “lost his faith in Iraq.” He details several events that led him to that point including being faced with having to treat both a severely wounded Marine and the insurgent who shot him.

After leaving the military and starting a medical practice, Dr. Anderson became increasingly aware of how broken our healthcare system had become. His observations led him to write the book “Universal Death Care; A Solution for Healthcare in the Age of Entitlement”

Dr. Anderson outlines some of the concepts presented in his book including the fact that between 50 – 80 percent of the illnesses and dollars spent on healthcare are completely preventable.  Our system is collapsing under the weight of too many people not taking personal responsibility for their own health. The administrative costs (30%) related to insurance are another aggravating factor.

“The solution that would save over $20 billion a year would be to have one set of rules and one set of prices. That’s enough money to insure every citizen in this country with zero co-pays and deductibles.”

TAKEAWAY:  “Too many people think they can live a lifetime of poor health choices and then visit a doctor to receive a magic pill to cure all their ills.”