Drug Enforcement Agency Special Agent William Czopek always wanted a career in law enforcement. Following his discharge from the Navy service he wanted to continue working in an exciting field and the DEA fit the bill.

Formally established in 1973, the Drug Enforcement Agency is a relative new comer to the list of federal law enforcement organizations. However, its roots trace back to the 1914 Harrison Narcotics Act. The biggest narcotics seizure in 1917 was 5.5 lbs. of opium. A recent pair of seizures confiscated sufficient methamphetamines to give a dose to every man, woman and child in both the U.S. and Mexico. 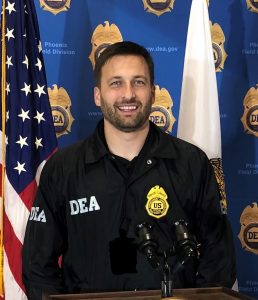 Because the drug trade is an international problem, the DEA does not just operate domestically but has agents working all across the world.

Over 72,000 Americans died from overdoses in 2019 and this year is on track to be worse with a 150 – 200% jump. Bill states that our current situation is the result of a perfect storm; increased demand driving a greater supply and more powerful drugs. The trail of bodies is not limited to overdose victims, The Mexican government estimates nearly 62,000 persons have “vanished” since 2006. Bill provides additional insight into why the sophisticated Mexican cartels are such a challenge.

The biggest current threats are meth and fentanyl because they are synthetic and not plant based. This translates into a simpler manufacturing pipeline.

The DEA website has a treatment center locator and the Substance Abuse and Mental Services Administration has a free hotline: 1-800-662-HELP

TAKEAWAY: “The DEA doesn’t stop working because the cartels don’t stop working. I never thought I would see a time in America where people are afraid to live in their own communities.”