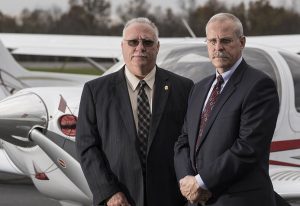 The Netflix series Narcos tells the story of the manhunt for Pablo Escobar from the perspective of two DEA agents.  The REAL agents featured in the series join American Warrior Radio to share their perspectives and thoughts.

For agent Javier Pena, the hunt for Escobar was personal.  Starting his career as a Sheriff’s Deputy in the border town of Laredo, he saw the damage done by the drug trade. Many of the police officers killed in Columbia during Escobar’s reign were his personal friends.

A West Virginia native, one of agent Steve Murphy’s first assignments was to the Miami office where he witnessed the cocaine wars and methods of the Narcos first hand.  Up until that time his largest bust had been 2 ounces of cocaine but his first seizure in Miami was 880 lbs.

While both Murphy and Pena consulted on the Narcos series, neither one saw the finished product until it was released to the public.  From their perspective, some of the scenes missed the truth by a little and some used more creative license.  Both agents say the series failed to capture the opulence of the prison Escobar built himself to serve his sentence.  Murphy says the “prison” was literally more like a private resort complete with chalets, a full bar and Jacuzzi tubs.  Unlike depicted in Narcos, Murphy’s wife stayed in country the entire time.

Both agents strongly disagree with the characterization of Escobar as some modern day Robin Hood.  While those working for him WERE extremely loyal, Escobar’s drive and charisma were backed up by “Plata o Plomo”. (Either take the money or take a bullet)  Murphy also disputes the characterization of Escobar as a caring “family man”. It is estimated that as many as 50,000 persons died during Escobar’s rise as the world’s first Narco terrorist.

TAKEAWAY:   “Viva Columbia, Pablo is Dead”. Both Murphy and Pena give full credit to the brave members of the Columbian police & military for getting the job done.