Bo Derek wasn’t on our list of celebrities to interview regarding their support of Veterans. As it turns out, I didn’t know Bo. 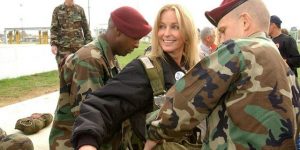 Many of her family members served in the military; her father was a radio operator on a B-29 during the Korean War. Her stepfather served as a Green Beret in Vietnam and her ex-husband was also a Veteran.

However, it was a chance encounter with the Secretary of Veterans Affairs Anthony Principi that really got Bo engaged. She accepted his invitation to attend the National Disabled Veterans Winter Sports Clinic and was blown away by what she described as witnessing a “miracle a minute”.  She would go on to serve eight years as Honorary Chairperson for all six of the Department of Veterans Affairs adaptive events.

Bo says she never considered becoming involved with the USO because “I don’t sing or dance”. But when her friend Wayne Newton became the head of the USO he asked Bo to participate in a special European holiday tour.

Bo has been named an Honorary Green Beret and had the opportunity to do a jump with the Army Golden Knights parachute team. She considers it one of the most amazing honors she has ever received.

When she started her specialty Bo Derek Pet Care product line, she took the opportunity to combine her passions for helping Veterans and helping animals. She donates product to deployed military working dog handlers and also donates a portion of proceeds to organizations that help retired military working dogs. “These dogs are saving our lives every day.”

Bo encourages listeners to seek out smaller, lesser known military and Veteran charities who are just as worthy of our support.

In 2003 she was awarded the granted the highest award available from the Department of Veterans Affairs.

TAKEAWAY: “You don’t have to be a celebrity to volunteer or help out. There are so many ways to help and encourage our Veterans.”