Glyn Haynie – When I Turned Nineteen

Home/Podcast/Vietnam/Glyn Haynie – When I Turned Nineteen
Previous Next

Glyn Haynie – When I Turned Nineteen

Glyn Haynie turned 19 years old one month after he set foot in Vietnam. Military service was in his family blood; a Haynie from every generation has served going back to the American Revolution.  Still, it was disconcerting that despite an Army policy against brothers serving together in combat, Glyn and his brother were shipped to Vietnam together. Literally on the same flight. 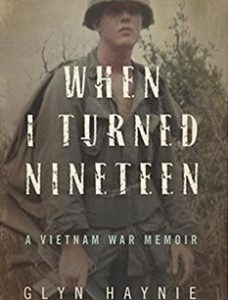 Glyn Haynie has published seven books, three related to his experiences in Vietnam and the years that followed.  His initial inspiration for putting words to paper was to forever memorialize the 13 comrades he lost in combat, but it proved to also be cathartic. He says he has repeated their 13 names almost every day since.

His book “When I Turned Nineteen” perfectly captures the grit, horror and sometimes boredom of combat.  Before he left Vietnam Glyn would be awarded both the Purple Heart and Silver Star. While he had no problem writing about his experiences, to this day he still has difficulty TALKING about them.

We spend some time discussing the differences in treatment received by Vietnam Veterans versus those who served in the contemporary conflicts. Three of Glyn’s sons deployed to Iraq and Afghanistan.  It took Glyn almost 45 years before he began proudly wearing a Vietnam Veteran hat. He recommends rather than telling a Vietnam Veteran “Thanks for your service” that one instead say “Welcome Home!”.

Like prior Vietnam era guests, Glyn strongly disagrees with the “broken Veteran” stereotype so often applied to his generation.

In his book “Finding My Platoon Brothers” he recounts the experiences and emotion involved with returning to some of the battlefields where he and his brothers shed their blood.

TAKEAWAY: “For me, my hatred of the enemy flourished on this ground, and I would never again be young. I continued to stare at the field where the explosion had stripped me of my youth, humanity, and my belief in God, hoping somehow I could get it back, all the while knowing I’d lost it forever”