Sarah Carlson was working an emergency management internship when the September 11th attacks occurred. Like many Americans she and her brothers decided to serve our nation. Her brothers joined the military but Sarah took a different route, choosing to join the Defense Intelligence Agency as an intelligence analyst and eventually moving to a role with the Central Intelligence Agency. Her entire career was focused upon counter-terrorism; groups plotting attacks against the homeland and Europe. 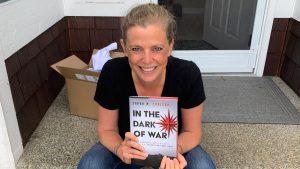 Her personal experiences and involvement in the harrowing evacuation of a US Embassy in are detailed in her new book “In the Dark of War; A CIA Officer’s Inside Account of the US Evacuation from Libya.”

Sarah volunteered to go to Tripoli in July of 2013, arriving just a few months after the Benghazi attacks. While the war did not result in any direct attacks on the embassy compound, situations devolved to a point where the decision was made to evacuate. Sarah and her colleagues had less than 48 hours to destroy all documents & equipment and prepare to evacuate.

An airborne evacuation was deemed too risky so they convoyed via a drawn out route to Tunis. Sarah knew that the same group that conducted the Benghazi attacks had moved into the Tripoli area and says that she fully expected to be ambushed immediately upon leaving the compound. She takes great pride in the fact that, even though she was a civilian, she was given the role of Tactical Commander for her vehicle.

Following that harrowing 26 hour journey to safety, Sarah couldn’t shake the feeling that we gave up and lost. This was an underlying factor in her decision to leave the CIA.

“Dark of War” is a unique read and I encourage everyone to buy the book!

TAKEAWAY: “The problem in Libya won’t be solved as long as there is still so much foreign intervention involved.”