Exposing stolen valor became a mission for Don Shipley and his wife Diane when they were approached by a man seeking to support their program for children afflicted with cancer. Something about man didn’t seem right so Don looked into his background. 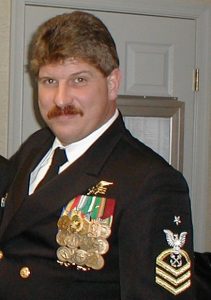 Fraudulently claiming to be the recipient of certain military decorations or medals in order to receive benefits is a federal crime.

Don has become THE go to person for investigating Navy SEAL claims. There have been days when Don has received up to 50 requests for help. Service as a SEAL is one of the most common instances of stolen valor and Don believes it is because claiming to be a SEAL automatically builds trust making it easier to defraud people. Don himself served with 8 SEAL platoons and was platoon leader of five. His wife is also a Navy Veteran.

It took Don 3 years to unravel the claims of one extremely accomplished liar who had bilked two doctors and several African nations out of $400 million. Turns out he was a convicted felon who never served in the military, much less as a Navy SEAL.

Don is one of a limited number of people with access to a comprehensive database of everyone who has graduated from SEAL training and it is his principal tool for exposing fakes. Don says one of the most difficult things he has to do is inform family members that their loved one’s claims of SEAL service are not true.

Ninety five percent of the persons he investigates did have some sort of prior military service but are ashamed their contribution was not more “heroic”.

Don and his wife also run the non-profit “Warrior’s Rest” program that allows children suffering from cancer and Veterans to spend time on their 80 acre farm hunting, fishing and just plain relaxing.

TAKEAWAY: “Your chances of running into a real living breathing Navy SEAL are about as good as sitting next to President Obama on an airplane in a coach seat.”