Home/Podcast/World War II / Korea/“Here I Am, Send Me” – D-Day 75th Anniversary
Previous Next

Here I Am, Send Me documents a very special parachute jump conducted over Normandy on the 75th anniversary of the D-Day invasion.  The film can be found on the Devinsupertramp YouTube channel. Two of the participants join us to share their thoughts and motivations. 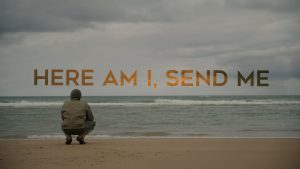 Scoti Domeij is the Gold Star mother of Army Ranger Sgt. 1st Class Kristoffer Domeij, the most deployed soldier in US history to be killed in action.  Matthew “Griff” Griffin served with Kristoffer and did four tours as an Army Ranger before founding Combat Flip Flops.

When Scoti learned that a group of Rangers and others were planning to make the anniversary jump she knew she wanted to participate but learned she did not qualify. She called Griff and in his words “It’s Kris’ mom. If she wants to jump into Normandy, she jumps into Normandy.”

Among the teams jumping that day were Team Freedom, consisting of a variety of former Special Forces members and their families, including Green Beret Mark Nutsch, one of the Task Force Dagger members made famous in the movie “12 Strong”. Team Gold Star included Scoti, Griff and Zach Carbo, another one of Kristoffer’s former Ranger teammates.

Both teams jumped from vintage WWII transport planes and wore authentic period uniforms including unit patches and jump boots. While most jumped with static lines, Scoti jumped in tandem with Zach and says the feeling of being under canopy over Omaha beach was so special she wished it could have lasted longer.

Scoti and Griff share the emotional experiences of walking those hallowed grounds. For Griff it was the poppy filled acres made famous in the poem “In Flanders Fields”. Scoti visited the Normandy American Cemetery and was struck that every name engraved on those crosses was some mother’s son.

TAKEAWAY:  “Here I am, Send me is not a history lesson. It is a film of remembrance, like a keepsake.”