Memorial Day, and the reason/manner in which she observed it, changed dramatically for Scoti Domeij on October 22, 2011. That was the day her son Kristoffer was killed in Afghanistan. That was the day Scoti “was drafted against her own worst fears” into a club that no one wants to belong to; the Gold Star moms. 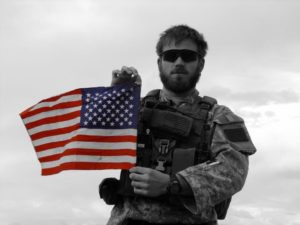 Scoti shares her journey of grief from the shock of the initial notification to her current endeavors to educate others.  “Now I duel between attempts to enlighten or extend patience toward those who, for whatever their reasons, appear to give little or no thought to sacrifice or to appreciate the privileges and responsibilities of their freedom.”

Because of the nature of his service with the elite Army Rangers, those 10 years of Kristoffer’s life were a black hole to Scoti. He is the most deployed soldier in American history to be killed in action.  During his 10 years of service, Kris was deployed 14 times.

Sometimes life has a way of sending just what we need when we need it. In this case it was a recent encounter with an Afghan-Muslim woman at a grocery store and her reaction to hearing that Scoti’s son was killed in Afghanistan.

Scoti now considers all Army Rangers to be her sons because they were comrades to Kristoffer.  It was interaction with one of these Rangers that set Scoti on her current path and role with Blackside Publishing. Writing has played a huge part in her journey of healing.

She shares that Memorial Day itself often isn’t as bad as the emotional build up to the holiday.  But she warns that there will always be “grief bursts”.  Scoti encourages others to reach out to Gold Star family members and/or contact the Tragedy Assistance Program for Survivors.  Click on the link or call (800) 959-TAPS.

Scoti will be parachuting into Normandy on the 75th anniversary of D-Day as a way to honor her son and others who paid the ultimate price for our freedoms.

TAKEAWAY:  “I can’t change his story. However, I CAN choose to face the history of my future without my son and live a life filled with purpose and passion that honors my son.”