Excellence in Policing author Andy Harvey has the resume to back up his concepts. He has over two decades of law enforcement experience; 21 years with the Dallas Police Department, two years as Chief of the Palestine, Texas PD and currently serves as Chief of the Ennis, Texas.  Andy also served 21 years as a member of the Air Force Reserve and the Texas Air and Army National Guards. 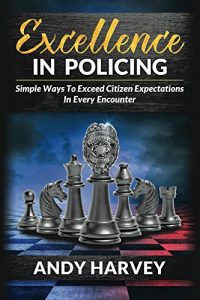 In testimony before the US Senate Committee on the Judiciary, Andy said “When members of the community do not trust law enforcement, crimes go unreported and it is a detriment to the community as a whole.”  The essence of Excellence in Policing and the training he has provided to hundreds of departments across the department centers on how police can build and reinforce a relationship of trust.

Andy’s “Police-Citizen Encounter Model” addresses the lack of mutual understanding between police officers and citizens. The model has three basic phases; the initial contact, process & decision making and final outcome.  He elaborates on each of these points.  Research has shown that the average citizen is more concerned about the process rather than the ultimate outcome.

We spend some time talking about how communication between law enforcement and the public has changed by body cameras and a world where every citizen now carries a camera in their pocket.  He says times have changed and departments has responded to community demands to share more information.

Andy also discusses what he calls the “ugly side” of policing; the stresses and situations that have driven the scourge of suicide among law enforcement personnel.  He says that while departments across the country are getting better at resiliency programs, work still needs to be done by leadership to facilitate help at every level for officers who are seeking help.  “At some level we are all walking wounded.”

TAKEAWAY: “Wearing a uniform doesn’t separate you from the community; it makes you more a part of it.”