The siege of Khe Sahn was one of the most ferocious and epic battles of the Vietnam War. Ken Rodgers was there and has produced a compelling documentary that everyone should watch: “Bravo! Common Men, Uncommon Valor”. Ken’s documentary features interviews and first-hand accounts with 15 Marines and a Navy Corpsman who survived the battle. 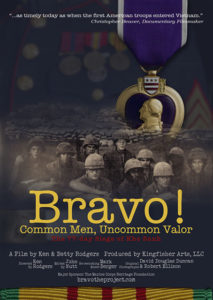 Khe Sahn pitted 6,000 Marines and our Vietnamese allies against 20,000 or more communist North Vietnamese troops. 274 US personnel were killed and another 2,541 wounded. Vietnamese losses in the battle are estimated at approximately 5,550 killed.

Early in the siege, enemy rounds hit the base ammo dump, leaving Marines to dodge not only their adversaries’ incoming rounds but also their own munitions.  The fire was so intense that supply aircraft did not come to a halt, with Marines jumping out the back ramp while wounded and body bags were thrown in.

Artillery and Air Support contributed to their survival, with over 100,000 tons of bombs dropped – about 5 tons for every enemy soldier.  At one point President Johnson even considered the use of tactical nuclear weapons.  Enemy soldiers were tunneling so close that our troops could hear them from the trenches with a stethoscope.

Some of the film’s most compelling scenes show Khe Sahn survivors not speaking but their expressions communicate volumes.  Ken emphasizes that while Marine training is top notch, nothing can really prepare one for combat, especially 18-20 year old “boys”.

Eventually the base was abandoned, a decision that did not rest well with the Marines who shed so much blood for a position they were told was strategic.  Ken also shares the struggles that he and his fellow vets faced upon their return home and moving on with their lives.

TAKEAWAY:  “You just don’t know what it’s like to see a 19 year old kid, lay down on his belly in the mud, and stick his rifle in that direction and give you the thumbs up and tell you to go THAT direction. And he knows damn good well he is NEVER gonna get up out of that mud.  He KNOWS he’s dying for you.”