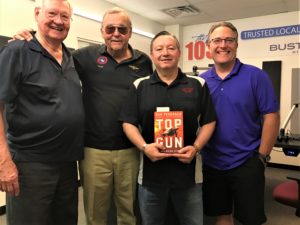 Top Gun founder Dan Pederson began his Navy career as a mechanic. Thanks to a great mentor, he would become a pilot and play a critical role in creating one of the most storied Fighter Weapons Schools in the world.  He wrote “Top Gun: An American Story” to celebrate its 50th anniversary.

Despite dominating air to air combat in World War II and Korea, the Navy kill ratio early in the Vietnam War had dropped to as little as 2 to 1. In the fall of 1968 Dan’s Commander handed him a thick document and asked him to implement the recommendations on page 37.  Top Gun was born.

Dan and his team of eight “original bros” were given 90 days to get Top Gun up and running. No easy feat given the need to basically deconstruct the aircraft and weapons systems in order to understand every aspect and then translate those lessons to their students. One of the big challenges was the F-4 Phantom did not have an internal gun and air to air missiles only had a 6% success rate. Dan’s team developed a new dogfighting maneuver called “The Egg” that took advantage of the Phantom’s power.  “There’s no MIG driver in the world that is going to follow you through that.” By the end of the Vietnam War the Navy kill ratio had risen to 24 to 1.

Reporting aboard the USS Coral Sea as a Wing Commander, he arrived just in time to take part is the “Mayaguez Incident”. Dan would go on to fulfill his dream of commanding an aircraft carrier, the USS Ranger.

Dan is very concerned that our military may be drifting into making the same mistakes by becoming overly dependent upon technology with our new generation of fighter aircraft.

TAKEAWAY: “Never send American kids to a war that you don’t intend to win!”