Undersea Rescue Command is one of the US Navy’s most specialized commands. Their mission is to be prepared to mobilize anytime to rescue any US or NATO submarine anywhere in the world. 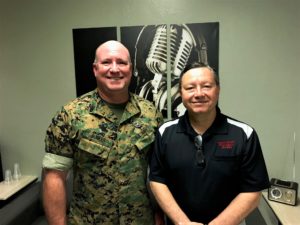 Master Chief Petty Officer Patrick Bunker is also a Captain in the Tucson Fire Department and was serving with Undersea Rescue Command when they were deployed to assist with search and rescue mission for the Argentinian submarine ARA San Juan in 2017. Pat shares the reason firefighters are perfect for the URC mission is that they are rescue operations rather than a combat operations. Firefighters are trained to treat injured personnel and work in hazardous environments.

Undersea Rescue Command no longer uses the Deep Submergence Rescue Vehicles as pictured in the film Red October.  They now deploy the Submarine Rescue Diving and Recompression System.  This is the only system in the world that is completely mobile and can be deployed via aircraft and ships.

On November 15 the ARA San Juan reported trouble with their snorkel and an onboard fire.  After no further contact, missing submarine procedures were initiated. This rescue was the first time that Undersea Rescue Command had been fully mobilized for a real world sub rescue since 1939. Over 40 countries and 4,000 personnel were involved in the search, making it the largest in world Navy history.

Because the San Juan was a diesel-electric submarine, they only had 7-10 hours of underwater oxygen reserves.  Eventually the Argentinian Navy declared the sub lost. 44 souls, including Argentina’s first female submarine officer lost their lives. The wreckage of the San Juan was finally located on November 16, 2018 at a depth of 2,976 feet.

While they were not able to rescue the San Juan sailors, Pat does take pride in the fact that everything worked the way it was supposed to; “There were no impossible problems and there were a lot of uncommon solutions.” As a testament to their commitment, one team member was expected a baby any day and another was being treated for stage IV cancer radio but chose to deploy anyway.