Life Flight personnel save lives. And they risk their own lives in doing so. 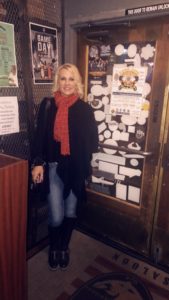 Beth Anne Laos served as a Life flight nurse for eight years during which she experienced both the highs and lows of being an “Angel with Rotors”. She was drawn to the field because she wanted to fly and started her career as an American Airlines flight nurse for long term medical transport overseas. However, after three extremely grueling and long flights decided that particular aspect of the career was not for her.  Instead, she began working as a flight nurse for helicopter flights.

Patient transport in the “tin sardine can” of a Life Flight helicopter has some unique challenges including VERY cramped quarters, noise, flying at night and during inclement weather.  A simple internet search reveals many unfortunate crashes that have taken the lives of Life Flight crews.

The “oddest” rescue Beth Anne shared was her own.  While caring for horses on her family’s remote ranch, she was kicked and received numerous injuries including a shattered radius, pelvis, arm and three fractured ribs.  Despite her injuries, she finished feeding the horses and walked a quarter mile back to the ranch house to call 911. In retrospect she chuckles that the firefighters were so nervous at treating a nurse they unsuccessfully tried six times to get an IV started.

The psychological wear and tear of the mission, the danger inherent in the service and the addition of three daughters eventually took a toll on Beth Anne and she decided to stop flying.

Beth Anne now uses her experience, education and training to help other first responders by coaching them through difficult times. She emphasizes that even though a first responder has retired, their “brain does not shut off” and they can carry the scars for the rest of their lives.

TAKEWAY: “You never give up on anybody – you don’t declare them dead until God says they are dead.”