The Ride for Relief was borne from Jeff Shepard’s method of dealing with the trauma he experienced as a police officer and firefighter. The Ride for Relief features a nationwide tour of press conferences taking place in police and fire departments. Jeff’s objective is to help reduce first responder suicides and increase health and wellness support within departments across the country. 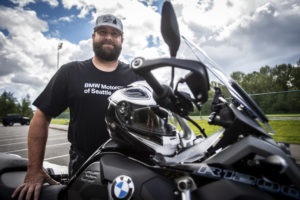 Jeff served as a police officer for 10 years and a firefighter for 7. During his time wearing the badge he both witnessed and experienced a great amount of trauma.  In 2012 he was ambushed by a shotgun wielding suspect and may have only survived because the perpetrator was using bird shot. However, because he had not fired his own weapon, Jeff did not receive any official counseling immediately after the incident. Eventually, the department psychologist formally diagnosed Jeff with PTSD. Three years later he and his partner were targeted in a pipe bomb attack. Jeff suffered a ruptured eardrum and shrapnel and burn wounds.

As a motor officer, Jeff found getting out and riding his motorcycle to be very therapeutic. After being introduced to Leslie Mayne and her Permission to Start Dreaming Foundation, Jeff decide to make a cross country ride to honor Leslie’s son Kyle who took his own life while suffering from PTSD.

Police and fire suicide deaths far exceed line of duty deaths. Jeff feels that many officers are still afraid to seek help for fear they will be perceived as weak or unable to perform their jobs.

This year’s Ride for Relief will tour 35 states touching all four corners of the country. Jeff stops to meet with departments in cities along the route to inspire others that they are not alone.

TAKEAWAY:  “We only regret the rides we didn’t take.”