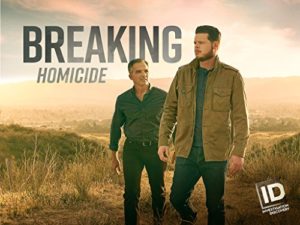 Hired at only 20 years old, Derrick was one of the youngest officers in the history of the Central Falls, Rhode Island police department.  In addition to patrol duties, he worked with various federal agencies as an undercover detective and earned numerous awards including the Medal of Valor – the highest honor a sworn officer can receive.

Fifty percent of homicide cases go unsolved. Derrick created Breaking Homicide because he felt compelled to help families whose cases have not received a lot of attention. Breaking Homicide leverages “Crowdsourcing”, which has become an important tool in helping to solve cold cases.  He says the worst part of his job is selecting which cases to undertake. Two important factors that influence the selection are the cooperation of the family and, ideally, the local police department.

Derrick shares some insights into “tradecraft” including the importance of treating every person fairly and the power of silence when interviewing suspects.

While Derrick doesn’t feel that DNA evidence is necessarily the “be all/end all” of police work, it is becoming a vital prerequisite for district attorneys to take a case to trial.  He hopes the increased use of DNA will not only help solve cold cases but also lead to the release of persons wrongfully charged.  However, DNA analysis is still very expensive. Derrick hopes to someday start a non-profit that will help provide funding for agencies that request DNA analysis.