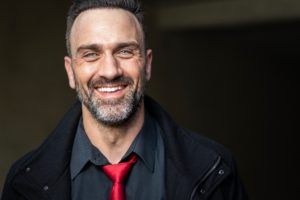 Jeff Bosley has faced tougher challenges than trying to make it big as an actor. He has served as a Green Beret medic and a firefighter so his “spectrum of suck” is probably wider that others in Hollywood.

Like most of his generation, Jeff grew up playing with GI Joes and watching action films. He began his college career studying medicine and taking a few acting courses, but military service was always in the back of his mind. When 9/11 happened it gnawed at his conscious so much that he enlisted even though he was almost 30 years old. Special Forces were his goal but the Marine recruiter’s door was locked so he went down the hall to the Army.

Jeff became a Green Beret medic and served 7 years before an injury forced him to forego re-enlistment. Jeff returned to his Colorado Springs home and began working as a firefighter. His truck company was awarded the Medal of Valor for their actions fighting the Martin Drake power plant fire.

Jeff had been a firefighter for two years but acting was still on his mind when he heard a graduation speech delivered by Jim Carey; “So many of us choose our path out of fear disguised as practicality.” Three days later Jeff Bosley moved to Los Angeles.

Reflecting his Green Beret training, Jeff has gone “all in” pursuing an acting career by living, eating, and breathing acting. He credits this attitude for securing “hundreds more” auditions than some of his peers.

Jeff is 6’5″ and there have been two instances where his height caused problems with screen time. His goal is to get leading man roles so someday the director will have to adjust to HIM.  Help Jeff secure his breakthrough role by joining the #BosleyForReacher campaign!

TAKEAWAY:  “We all rise together”