Air Force Para Rescue is widely recognized as the best in the world at what they do.  However, they are perhaps the least well known of our elite Special Forces.  There are only about 500 “PJ’s” in the entire Air Force compared to more than 5,000 Navy SEALs and 10,000 Green Berets.  Para Rescue training is one of the longest Special Forces training courses in the world and has an attrition rate of over 85 percent. 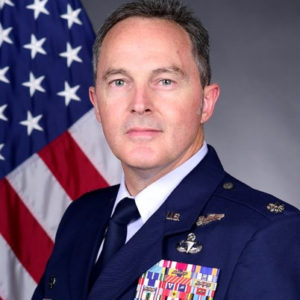 Lt. Colonel Blake George is the Commander of the 48th Rescue Squadron. He began his Air Force career in 1991 as an enlisted Airman Combat Controller.  He entered Officer Training School in 2002 and helped stand up the newly designated Combat Rescue Officer career field.

Blake was deployed with the 48th Rescue Squadron to Djibouti, Africa in June of 2018 when US Special forces and African allies came under mortar and small arms attack. Despite aircraft malfunctions and tactical limitations, PJ’s fought their way in and out TWICE to fulfill their motto “That others may live.” His crews saved four lives that day.

Blake shares details of this mission which would be designated the “Rescue Mission of the Year” by the Jolly Green Association.  An interesting detail shared by Blake was the fact that the forces engaged in the firefight did not have radio contact and initially called the base using a cell phone.

Blake says “We typically don’t do things in nice places.” In his 28 years in the Air Force he has had 22 deployments all over the world including Somalia in 1992-93.  Blake had been home for a month when the Blackhawk Down incident happened and it made him VERY angry and frustrated that he was not there to help.