War correspondents have been covering human conflict for centuries.  Some civilian correspondents are well known like Ernie Pyle, who was in the trenches with soldiers during World War II and Joe Galloway, who famously picked up a rifle to fight off the enemy at the Battle of La Drang Valley. 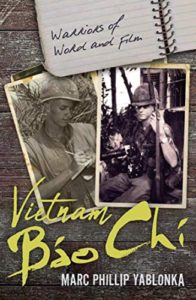 The very first chapter features well known actor and Marine Vietnam Veteran Dale Dye.  Several of the stories highlight the challenges of “old technology” such as Roger Hawkins who was issued a bag of dimes to call in from public pay phones whenever a story broke. Unlike today, all the military war correspondents in Vietnam were men.

Two of Marc’s interviews are with civilian correspondents whose photographs had a significant impact upon perception of the war back home. Eddie Adams took the photo of General Nguyen Ngoc Loan executing a Viet Cong Guerrilla. What was NOT reported was the fact that earlier that day the same guerrilla had executed one the entire family of one of General Loan’s officers.

Nik Ut was a Vietnamese photographer who took the famous “napalm girl” picture in 1972. What is not commonly known is that Nik borrowed a poncho to cover the girl and carried her to the hospital. Facing a long line of wounded soldiers, Nik threatened to use his media status to “expose” the hospital if they did not immediately treat her, saving that little girls life. Nik and “Kim” remain lifelong friends to this day.

TAKEAWAY:  From correspondent Jim Morris – “I should point out that soldiers neither win or lose wars. Nations do that. Soldiers either accomplish or fail to accomplish their assigned missions. When you get 100 percent accomplishment of all missions assigned and lost the war, the place to look is not the military, but at the civilian leadership.”