The “Other” Greatest Generation

The “Other” Greatest Generation 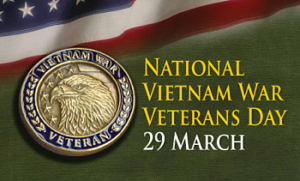 When one spends five and a half years interviewing Veterans from World War II through the present wars, common themes emerge; the chaos of war regardless of technology, the resilient comradery of those who fought together and the challenges to the human spirit and mind of processing the horror of war. These are things all Veterans share regardless of their generation.

On National Vietnam War Veterans Day I was reminded of my talk with BG Burkett, whose crusade to counter the negative stereotypes of Vietnam Veterans led to the creation of a nation’s first law addressing Stolen Valor.  It struck me that Veterans who served during the Vietnam era have a common issue unique to their generation.

During World War II those on the home front lent their backs to the effort, from women working in factories to children conducting scrap tin drives for the war effort. Together we won the war and together we celebrated those who wore the uniform. Vietnam Veterans served during a period of history when our nation was fractured and the homecoming they received reflected these divergent attitudes.

Typing “Vietnam” into the American Warrior Radio search bar yields numerous results.  One would think that as the host I would have a better sense of what would pop up.  I was surprised. Not by their stories of time in combat but by the examples they set following their service.  Roger Staubach excelled both in sport and business gives back to other Veterans. Frederick Gregory went on to become NASA’s first African American Space Commander. To this day Michael Reagan continues to hand draw memorial portraits for thousands of families of the fallen. Both Dale Dye and Peter Sherayko went on to very successful Hollywood careers.  John Moynier crafts a special wine that has raised over $40,000 for the Purple Heart Foundation. Special Forces medic Richard Carmona became our nation’s 17th Surgeon General. And, of course, many like Gene Santarelli, Tom Keck, Robert Johnson, Don Shepperd and Earl O’Loughlin stayed in uniform to ably lead our warriors in other conflicts.

WWII Vets have been called the “Greatest Generation” for saving the world from evil DURING the war.  One should consider the greatness of the Vietnam generation for what they have done (and continue to do) FOLLOWING their war.