Most Americans associate the term Underground Railroad with our own civil war. The Emancipation Proclamation freed an estimated 3.1 million slaves in the US.  However, listeners may be surprised to know there are more persons in slavery around the world TODAY than ever in history; an estimated 40.3 million modern day slaves. The United States is the largest “consumer” in the $32 billion sex trafficking industry. 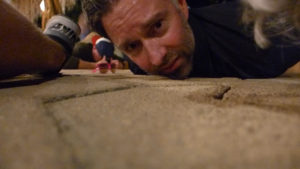 Matt Osbourne is the Special Projects Coordinator for Operation Underground Railroad.  He joined the organization after a 12 year career with the Central Intelligence Agency and Department of State.  Operation Underground Railroad was founded by Tim Ballard to rescue children from sex trafficking. They do so by using “jump teams” of experts in extraction operations including former Special Forces operators. Some of these specialists lend their skills at little or no cost to the organization.

Operation Underground Railroad has been involved in nearly 100 initiatives, many of them in other countries.  Matt emphasized that they work WITH the appropriate authorities in each country before conducting each operation. “We go through the front door or we don’t go in at all.” Very often these countries know who/where the bad guys are but need “an American face” to play the role of “buyers” with the traffickers. Matt jokes that he has been “arrested” in quite a few countries around the world.

One of their rescues is featured in the documentary “Operation Toussaint” – an extraordinarily powerful look into the human trafficking scourge and the tremendous mission of this organization.

The aftercare component of Operation Underground Railroad is an essential element. So many of these rescued children have no place to go and their life as a sex slave is the only “normal” they know.

Listeners can help by getting free online training to recognize human trafficking or joining the “Abolitionist Club” with a small monthly contribution.  If you suspect someone is being trafficked, call the National Human Trafficking Hotline at 888-373-7888.

TAKEAWAY: “The numbers are vast but if one considers the parable of starfish on the beach; if you rescue just one it matters to them.”