The Naval History and Heritage Command serves as the Navy’s institutional memory by preserving, acquiring, producing and disseminating Naval history information and artifacts.  Samuel Cox joins us to discuss the discovery of the remains of the USS Hornet – 76 years after she was sunk. 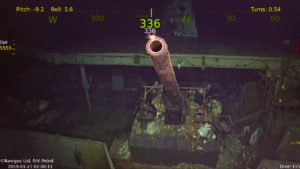 Samuel became Director of the NHHC in 2014 after an illustrious 37 year career as in intelligence officer.  As a history major at the US Naval Academy, the opportunity to serve as Director of the Naval History and Heritage Command was the perfect transition to civilian life.  He says an added benefit is “Everyone still calls me Admiral but I don’t have to get a haircut.”

The Naval History and Heritage Command partners with Vulcan, Inc. – an organization created by Microsoft Cofounder by Paul Allen. Their underwater research and exploration vehicle R/V Petrel has had great success in discovering the final resting places of many historic ship wrecks. In late January they pinpointed the final resting place of one of WWII’s most storied aircraft carriers, the USS Hornet, 17,500 feet below the surface of the Pacific Ocean.

The famous Doolittle Raid on Tokyo was launched from the USS Hornet, the first and last time twin engine bombers flew off a carrier. Despite only have been in commission a little over 1 year, she earned four battle stars including a major role in the pivotal Battle of Midway. The USS Hornet was sunk at the Battle of Santa Cruz Island in October of 1942.

The NHHC has 14 locations through the country including 10 official Navy museums.  They are also responsible for maintaining the 200 year old frigate USS Constitution in Boston and even have an 1100 plane air force “on sticks”.   Their archive and library are a great resource for amateur and professional historians alike.