“Rampage: McArthur, Yamashita, and the Battle of Manila” is James M. Scott’s fourth military history book and has been named a Best Book of 2018 by Amazon.  James is one of my favorite authors because his research is meticulous. 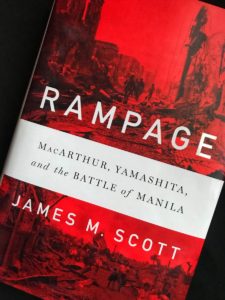 Manila has been the scene of 12 battles, the first occurring in the year 1258.  The World War II battle began February 3rd and pitted two military leaders of great reputation.  For General Douglas McArthur, it was the fulfillment of his famous promise “I shall return”.  For Japanese General Tomoyuki Yamashita it was a return to front line combat after handing the British their greatest defeat in history with the capture of Singapore.

When McArthur withdrew from the Philippines, he declared Manila an open city to spare the historic capital and its residents. Yamashita made no such pledge, with the Japanese fortifying every corner and even graveyards.  Historian William Manchester wrote that the devastation of Manila was one of the greatest tragedies of World War II.

Rampage captures the horrors and atrocities committed by the Japanese forces upon the civilian population including women and children.  Many of these brutalities were conducted by troops under the command of Japanese Admiral Sanji Iwabuchi. Over 100,000 civilians lost their lives before battle concluded March 3rd.  James calls it a battle completely borne upon the backs of the civilian population.

James shares some of the survival stories of the civilian internees imprisoned at the University of Santo Tomas. Despite their desperate situation, this collection of professionals and business leaders created their own small functioning city.

General Yamashita was eventually convicted of war crimes but Rampage brings new light to the complexities of his trial. His conviction was appealed all the way to the Supreme Court and set a precedence that is still followed today.

The firebombing of Tokyo is the subject of James’ next book project.

TAKEAWAY: In 1953 Philippine President Elpidio Quirino pardoned many of the war criminals saying “I am doing this because I do not want my children and my people to inherit from me hate for people who might yet be our friends.”