Catkiller was the call sign for the Army 220th Aviation Company over Vietnam.  They flew light, slow, single engine aircraft with virtually no armament.  Ray Caryl was one of them. 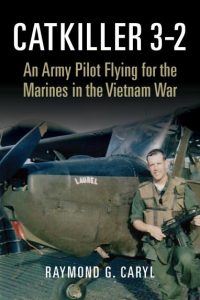 The role of these Birddog pilots is described in his new book “Catkiller 3-2: An Army Pilot Flying for the Marines in Vietnam”.

Ray and his fellow “Birddog” pilots flew the O-1, a military version of the Cessna. Perhaps not very sexy but the O-1 has been called the deadliest aircraft in the US inventory because of its ability to bring artillery and air support to bear upon the enemy.  A birddog pilot was also the angel on the shoulders of ground troops and often just the sound of their engine brought a boost in morale.

Ray shared some of his adventures including accidentally flying through the “steel rain” of a B-52 bombing run and the very odd situation when a North Vietnamese soldier surrendered to Ray and his aircraft.

Catkiller pilots were known to do some crazy things to help protect Marines on the ground. Ray was enjoying a nice scotch in the officers club when the Tet Offensive brought his base under fire.  Keeping his drink in his hand, he ran to his aircraft rather than a bunker.  He flew several missions that night and reports that he threw that scotch glass out the window hoping it would hit an enemy on the head.

Ray encourages younger listeners to not reject service in the military because it can be a stepping stone to many great things later in life.

TAKEAWAY:  “I wouldn’t trade my experience in Vietnam for a million dollars. Supporting those troops on the ground gave me a sense of accomplishment that is hard to define.”