Bobby Henline could have given up.  But he didn’t. Now he uses humor to help others heal as well. 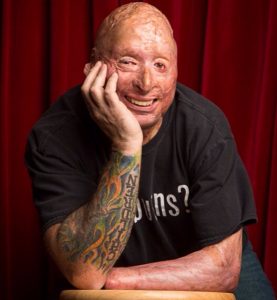 Henline joined the Army at the age of 17 and deployed as part of Operation Desert Storm.  He served for three years before leaving the Army to move on with his life. Like many Veterans, Bobby was compelled to re-enlist following the 9/11 attacks and went through boot camp again as a 30 year old. On April 7, 2007 – three weeks into his fourth deployment an IED exploded under his vehicle, killing 4 crew members and leaving Bobby with severe burns over nearly 40 percent of his body.

He awoke from a medically induced coma two weeks later and, looking into a mirror did not recognize the man staring back.  Henline used comedy as a dealing mechanism during his recovery, so much so that one of his therapists suggested he should pursue a career in stand-up comedy.  “The Well Done Comedian” was born.

Along with four other severely wounded Iraq & Afghanistan Veterans, he was featured in the HBO special “Comedy Warriors – Healing Through Humor”. He has also appeared in several Television shows and films.

The heart of his humor is encouraging people to be able to live their life to their fullest no matter their situation. Henline does so as a tribute to his fellow crew members that didn’t survive. He admits that there are times when he doesn’t want people to stare at him but he realizes that every opportunity to make a difference matters.

Bobby’s company Freedom Hard seeks to encourage people to enjoy their freedoms and being proud of what they have. A portion of all the proceeds benefit various Veteran charities.

Henline says that the best part of his deployments were the humanitarian elements of his missions.  He cautions that the “hearts and minds” strategy takes time. He feels that Iraq will definitely become a better place down the line.

TAKEAWAY: President Roosevelt’s quote “Do what you can with what you have where you are at.” has become his personal motto.