Like many of his generation, Army Ranger Ray McPadden joined the military following the 9/11 attacks. He served seven years with the 2nd Ranger Battalion and 10th Mountain Division – including four combat tours. Ray spent almost two years on the Afghanistan/Pakistan border during which time his unit established the first American foothold in the notorious Korengal Valley – the same valley made famous in Sebastian Junger’s award winning documentary “Restrepo”. 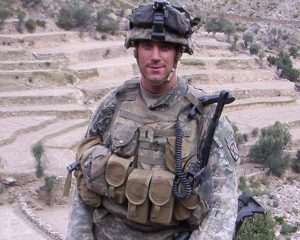 Ray also served in Iraq where he helped form special operations task force comprised of elite Army Rangers and Navy SEALS.  His unit conducted highly classified missions against agents of foreign governments and was integral to a cease fire achieved among Iraqi militias.

He has earned a Purple Heart, TWO bronze stars, a medal for valor and is also a Pat Tillman scholar.

His time in Afghanistan became the inspiration for his first novel “And the Whole Mountain Burned” set for release November 6th.  Ray fills us in on some of his real life experiences that influenced the story, including interaction with local tribes and the very rough mountain terrain. “It was much more personal in Afghanistan. You hear the very same bad guys on the radio every day and you meet members of their family.”

There were many precious gem mines in the area that Ray patrolled. It was not unusual for area children to loot the mine tailings and then try to sell what they discovered to US troops. This formed one of the story lines for Ray’s novel.

“And the Whole Mountain Burned” is a gritty novel that exposes both the horrors and heroism of war in ruthless detail.  Ray has an excellent descriptive voice and his book makes you feel like you are climbing the valleys of the Hindu Kush with his troops.

Ray shares that in spite of our best intentions there are always side effects. These don’t make American soldiers villains; it is just what happens in war.

TAKEAWAY: “It wasn’t easy by any means. I went looking for adventure and I found it..but it was hard won. Those experiences have fundamentally shaped who I am and my outlook on the world. “