Being named Sailor of the Year on one of the most advanced fighting machines in the world is quite an achievement. USS Tucson Chief Petty Officer Michael Larson and his wife Alisha pop into the studio during their Namesake City visit to share some thoughts. 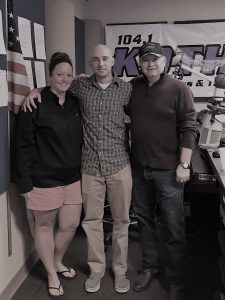 Michael is a Machinist Mate which means he is responsible for maintenance and repairs of key components aboard the submarine. He was named Sailor of the Year for his steadfast commitment to vital repairs that allowed the USS Tucson to fulfill missions of national interest. While most of us would find the pressure of doing repairs several hundred feet underwater less than pleasant, Michael says that is a challenge he enjoys.

He had several relatives who had served in the Navy so he chose the submarine service to continue the tradition. He has served on two submarines during his career.

When a military member deploys, the whole family deploys. Alisha shares the importance of family support and the role of the Family Resource Group in helping submarine families deal with the special challenges of their service. There have been some deployments when she had NO contact with her husband for nearly four months. The FRG also works to provide support for the unmarried sailors on the crew of the Tucson.

The USS Tucson is a Los Angeles Fast Attack submarine based in Pearl Harbor, Hawaii. The namesake relationship between the submarine and the City of Tucson is considered to be one of the best in the Navy.