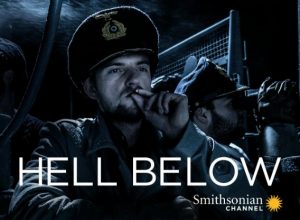 Hell Below is a documentary series of the Smithsonian Channel describing submarine combat during the Second World War.  On today’s show we talk with James M. Scott, one of the experts featured in the series and retired Navy Rear Admiral Ron Morgan.

James has written several excellent books about historical military events including Target Tokyo, Attack on the Liberty and The War Below.  Two of the submarines James highlights in The War Below are featured in the Hell Below series.

Ron Morgan served four years on submarines during the Cold War and another 31 ½ years in the Navy Reserve. One of his assignments was as Deputy Commander of the US Pacific Fleet submarine force. He was the only Navy Reserve Admiral qualified to man the battle watch in the “Looking Glass” airborne command center. 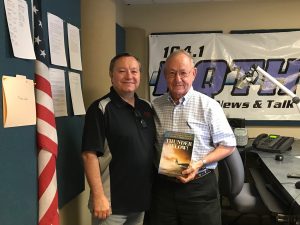 During WWII, one out of five submarines did not return from patrol. They were often lost with all hands on board. One of the exceptions was the USS Tang which was sunk by her own malfunctioning torpedo.  Nine crewmembers successfully exited the sunken boat and were taken prisoner but 78 sailors died.

We discuss some of the unique “characters” who commanded World War II submarines including Eugene “Lucky” Fluckey.  Fluckey was the first submarine captain to fire rockets at land targets from the deck of his submarine and was also the only submarine to “sink” a train. Fluckey’s story is one of the episodes featured in Hell Below. Fluckey was the Pacific Fleet Submarine Force Commander when Ron reported to his first submarine.  Ron also shares some memories of Warren “Moose” Grossetta who completed seven submarine combat tours during WWII

While technology has changed significantly since World War II, some elements have not. Diesel powered submarines have a limited amount of battery power and air, whereas today’s submarines can remain submerged as long as their food lasts. Ron shares stories of placing cartons of food on the submarine corridors deck plates and walking on food early in their deployment.  World War II submarines were actually submersibles – traveling faster on the surface than submerged. Today’s fast attack submarines can outrun almost any surface ship while submerged.